During the process of terminating employees, employers must maintain an outlook of utmost professionalism. Termination requires a high level of legal care, to avoid clashes and disputes afterward. Interests of both the employer and the employee must be taken into account during the termination process, to enable a smooth transition for everyone involved.

To find out more about how to terminate employees, let’s take a closer look at what exactly is employee termination policy and the policies and procedures that you must ideally follow.

What is Employee Termination?

Before we jump into employee termination policy, let’s take a closer look at what encompasses an employer and an employee according to the Indian labour laws.

The types of employers include

Establishments – This term takes all kinds of employers under its umbrella.
Factories – This term specifically refers to employers in the manufacturing sector.

Types of employees include

Employees– A term which refers to all employees in any kind of job position
Workmen– This term was defined in 1947. Employees who are not employed in administrative, supervisory, or managerial roles are termed as workmen.

With that in mind, let’s take a look at the types of termination under which an employee is let go from a company.

Types of Termination of Employment

Voluntary termination means that an employee voluntarily terminates his/her employment with a company. This might involve personal reasons on behalf of an employee, such as getting a new and better job, resigning from a field, or starting up their own venture. This might also be due to professional reasons, as a result of constructive dismissal. Constructive dismissal refers to a situation where an employee is dissatisfied with his/her workplace. They may be facing harassment, low wages, long work hours, long commute, etc.

Forced discharge of employees from an organization also falls under construction dismissal. An employee facing a forced discharge may be eligible for some form of unemployment benefits. Voluntary termination requires an employee to hand in a formal letter of resignation to the employer. The standard notice period is 30 days. But this term may be shorter depending upon the organization.

Layoffs and Downsizing refer to a company reducing its workforce. Employees who are downsized are usually let go without their own fault. Companies downsize to save costs and restructure their workforce. Downsizing is common when a company is bankrupt or goes for a merger. Layoffs may also happen because an employee’s skill set is no longer useful for a company in the present day.

Employees may be fired from their jobs due to unsatisfactory work performance, or because their behaviors and attitudes cause trouble at the workplace. In many countries, including India, an employee who is fired for misconduct need not be given a 30-day notice. Employees that are fired for violating company policies must be given a chance to explain themselves before they are fired.

An employer is in complete charge of hiring and firing people in his/her organization. However, an employer cannot fire an employee without sufficient cause or reason. Terminating an employee based on caste, race, colour, gender, etc are illegal causes of termination in many countries. An employee who has taken maternity leave or a leave of absence, or has reported wrongdoings in an organization cannot be fired on these grounds.

Termination under contract occurs on specific, predetermined terms that are set at the time when an employee is offered the contract. For instance, advisors for private firms and internships are often offered for a specific time frame. At the end of this time frame, the employee is considered to be terminated, unless he/she is offered another contract or the existing contract has been renewed.

The salary compensation and other benefits are according to the terms and conditions of the contract. However, a notice period of one month and 1 month’s compensation is required for terminating contractual employees.

State Labor Law as Per The Indian States

The Delhi Shops and Establishments Act of 1954 is very similar to Maharashtra Act. In Delhi, employers are required to give a notice period of at least 30 days for terminating employees who have been employed for more than three months, or they can be given a salary in lieu of such notice. The employer does not need to give a notice period if the reason for termination is misconduct. However, the employee must be given a chance to explain himself/herself against any misunderstandings or allegations.

Under The Karnataka Shops and Establishments Act, 1961 and the Tamil Nadu Shops and Establishments Act, 1947, an employee who has been with the organization for more than six months cannot be terminated suddenly without a reasonable cause. The employee must be given a notice period of at least 30 days. Employees terminated for misconduct can be terminated immediately without any compensation or notice.

According to the Andhra Pradesh Shops and Establishments Act, 1988, The notice period of an employee who has given the service of at least 6 months, there would be no notice period. The employee has the right to tell and explain the Separation in the notice of Resignation letter.

The employer shall give a notice period to the employee of 30 days according to the law. Even if there is no employee eligible for gratuity payment, the Act is still applicable to the establishment. This can take place within 30 days of termination.

According to the Rajasthan Shops & Commercial Establishments Act, 1958 no employee how has been in continuous employment for a period of fewer than 6 months can leave the organization without giving him a month’s notice period.

Termination Rules For Employees in India

Your employee termination decision most probably falls under one of the reasons described above. Whatever the cause of firing your employees, certain federal and central rules must be followed by every organization. Here are the 6 important rules that you must abide by before terminating your employees.

A 30 to 90 day notice period is standard for terminating the workforce in your organization. Stated under the Industrial Disputes Act of 1947, the law mandates that when terminating more than 100 members working in a manufacturing plant, mine or plantation unit, government approval is required. Terminating employees in other sectors requires only a government notification.

Under the Indian labour laws, an employee can be lawfully terminated from an organization for one of the following reasons:

1. Disobedience or will full insubordination

3. Loss or Damage to the employer’s goods wilfully.

5. Absence without applying for leave for more than 10 days.

When an organization fires an employee for convenience who is pregnant or seeking maternity leave, they run the risk of non-compliance with the Maternity Benefit Act of 2017 in the Indian constitution.

Non-solicitation clauses can be used in a limited fashion, whereas non compete agreements cannot be enforced according to Indian law.

Most states in India have laws that allow for up to 10-15 days of paid leave in a year. In addition, employees can get up to 10 days of sick leave, and another 10 days of casual leave. Employees seeking leave under these criteria cannot be considered terminated.

Here’s a quick checklist that outlines some of the procedures that you must follow when terminating employees.

Before serving a notice of termination to any employee, you must take a look at your company’s HR rules and policies. Every company has a specific set of procedures for dealing with different scenarios.

Refer to The Employee Agreement:

The employee agreement will contain provisions relating to the notice period, severance pay, compensation and so on that must be offered to the employee upon termination. This agreement is often signed at the beginning, and it serves as an important reference that holds up in a court of law.

The Industrial disputes Act of 1972, also states that retrenched ( involuntarily dismissed) workmen must be given 15 days of severance pay for each year of service that they have completed.

Exit interviews help an organization to gain feedback and evaluate their work culture, environment, ethics etc. It also helps organizations to narrow down their areas of improvement when it comes to enhancing employee experience in the office.

An employee who has been dismissed has a legal right to appeal to his/her jurisdictional authority. Your employee could appeal to a court for one of the following reasons-

1. The employer has terminated an employee without stating a specific reason.

2. The employee has not been proven to be guilty of misconduct and pleads innocence.

3. The employee feels that their dismissal was based on unfair grounds.

When an employee seeks redressal of any of the following grievances, they have to first establish a case and seek the approval of their local labour authorities. Once the approval is granted, the case may be overseen by jurisdictional conciliation officers, industrial tribunals or labour courts. The Indian Industrial Act of 1947 seeks to address grievances for workmen in an industrial workforce.

Most workforce disputes in India take anywhere between 6 months to 2 years to get resolved.

Your exact policy for terminating employees will vary depending upon the state in which your organization is established. Different states have their own set of Acts and are governed by slightly different jurisdiction practices.

Some organizations also outsource their termination process to third-party vendors, especially in case of mass layoffs. Terminating employees in a systematic process, in compliance with your local rules and regulations, can save your company a lot of hassle.

Upgrade to 3000 READY TO USE HR DOCUMENT

and Get FREE HR & Payroll Software 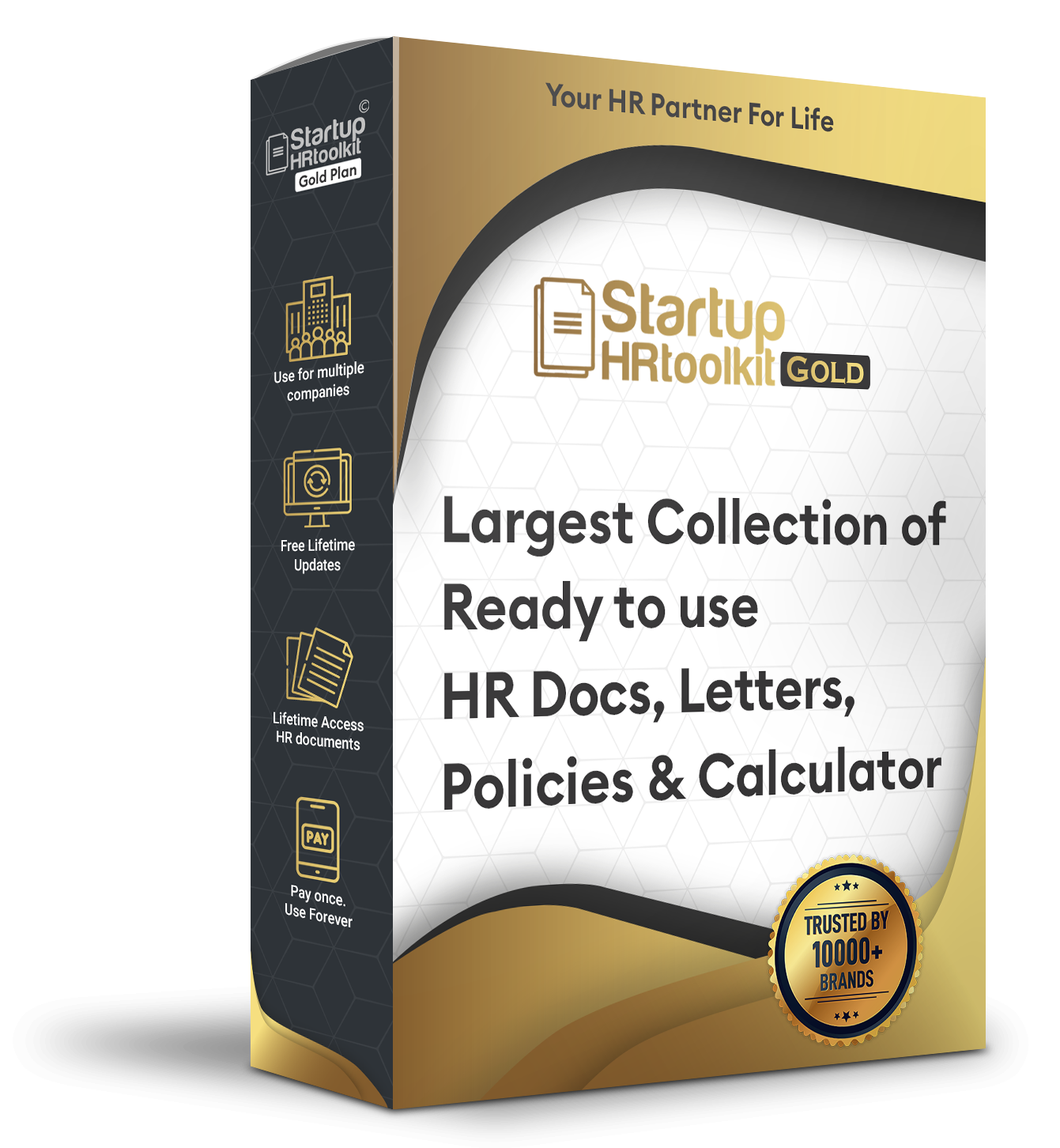